Refashion Runway Week 4: Maxi Dress or Skirt and an Apology 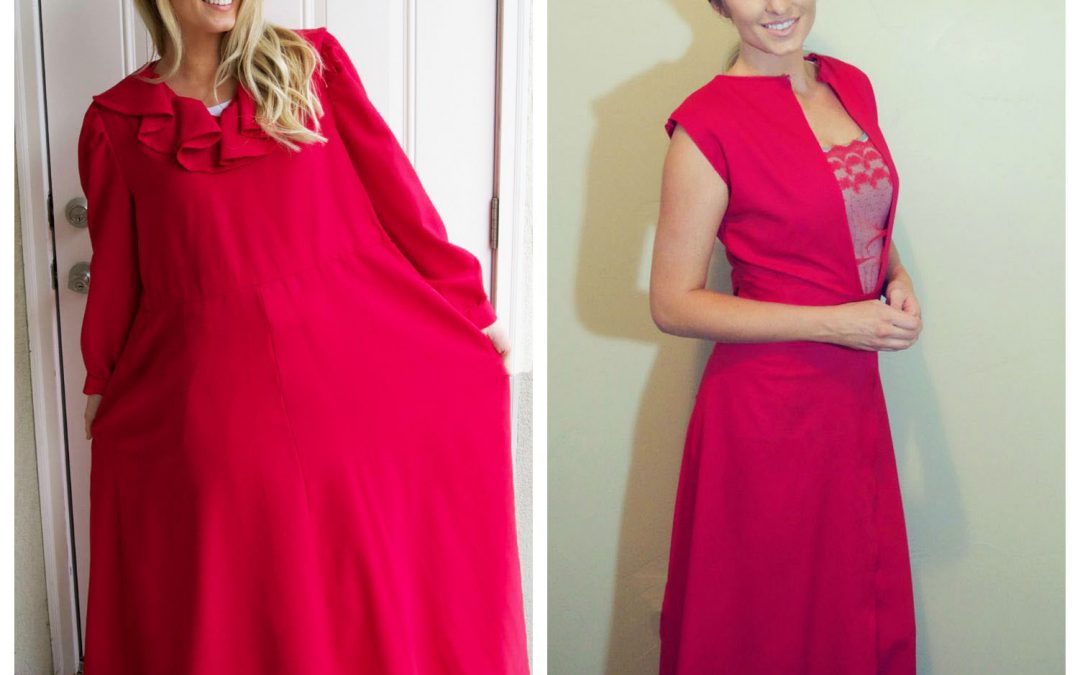 This dress…nearly killed me.  At one point, I spent over an hour staring at it before giving up and going to bed.  I tried three different dress refashions before I  finished this.  Oh, and I’m wearing the end result backwards because I ended up liking it better that way.  It gave it a structured/architectural feel. And the lace?  Leftover from this refashion.   I was so stress and time crunched, that I didn’t take a ton of pictures to document the making of this dress.  But I took of the collar, the sleeves, removed the skirt, took down the waistline, reattached the skirt, added a clasp hook near the waist, took in the side seams, and incorporated a lace panel. I made a mistake this week and accidentally wrote something that people found offensive.  I compared the original dress to a circus tent because of the ruffle at the top and the triangular shape.  That made  people upset because they felt that I meant that bigger sizes were like tents/tarps.  That is absolutely NOT what I meant.  I’m so sorry.  Here’s how the comments worked out, along with my apology, and I have since had that statement about the tent removed: I’m glad I waited to post this refashion onto my blog until today so I have a chance to apologize and clarify where I’m coming from.  I had Beth remove my original statement that when unedited said, “I think this dress used to be a circus tent.”

A few people have also taken the mention that it’s homemade as an insult.  My original wording, which is still on the refashion runway blog, says, “This dress was homemade,
which I quickly discovered as I began disassembling it. I kind of love that, knowing that someone else worked hard with the same fabric I’m working on.”

I hope people understand that I love that it’s homemade.  Of course I do, most of my own clothes are homemade!  That was not an insult in the least. I learned a lot this week and will do better to consider how what I say might affect others.  Hurting people’s feelings is something that haunts me.  I’ve cried about this and have not been able to shake away that negative feeling that I offended people.  I’m not a mean girl, it’s not who I am.  I seriously considered dropping out of this competition, but decided that quitting wouldn’t resolve the issue, so I’m sharing what happened here in my own post.   If I hurt your feelings, I’m terribly sorry.  I was wrong.

The person with the lowest votes get kicked out each week, I hope this mistake doesn’t count against me.  If you want to vote, please do so here.