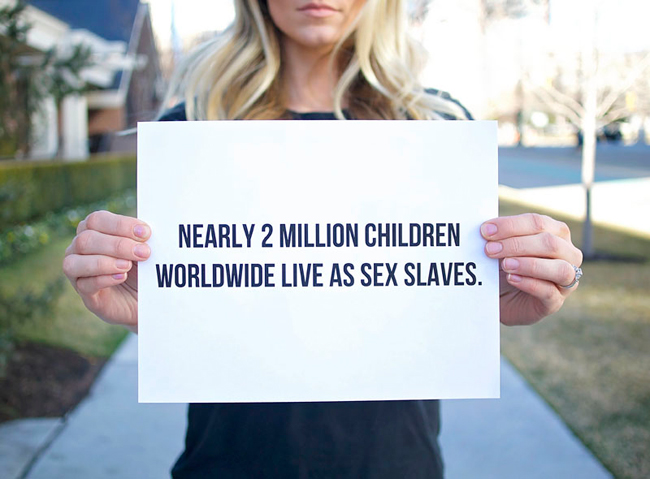 I’m going to speak openly for a minute about a difficult topic—CHILD SEX TRAFFICKING.  There’s no nice way to say it.  No euphemism for it. It makes us uneasy, uncomfortable.  And it should.

It should bother us.

And the numbers aren’t small.  It’s estimated that 2 million CHILDREN are being trafficked for sex right now.  That’s about 10 times more than the entire population of Salt Lake City.  That’s enough children to fill Rio Tinto Stadium over 98 times.

These precious souls are having their youth stolen from them as they face a brutality and violence they will never understand.  Sex trafficking and the sexual abuse it renders is a darkness that’s hard to fathom.

But it’s also a darkness that can no longer be dismissed.  We can deny it, plug our ears, block our newsfeeds, and pretend the world is how it should be, but that cannot change what is real, what is happening.

And it’s happening here, in our country too. Since 2007, the National Human Trafficking Resource Center hotline has received reports of 14, 588 sex trafficking cases INSIDE THE UNITED STATES. (source) In fact, in 2015 human trafficking occurred in all 50 of the United States (source).It’s hard to realize that this is going on around us, but it’s the truth, and people need to be aware.  We need to be aware so we can rally against it.  You cannot fight an enemy you do not know you have.

This is the holocaust of our generation, and while this abuse may not be a physical death, it is torture, and attacks the soul. I have compared child sex trafficking to darkness.  Darkness makes us live in fear.  Darkness can enfold around us, crushing the embers of hope and filling our hearts with despair.  But even the greatest darkness cannot deny the light of a single flame. There will always be light.  Darkness cannot remain in the presence of light; and for this cause, the light is Operation Underground Railroad. (O.U.R.)

In less than 2 years since its establishment, O.U.R. has rescued 419 victims of sexual trafficking and arrested 192 traffickers around the globe.  O.U.R is composed of former U.S. Navy SEALs, CIA operatives, law enforcement officers, medical personnel and military veterans who work with local governments to find and arrest traffickers while they also rescue those being trafficked. I recently had the opportunity to attend the premiere, The Abolitionists , which is a  documentary about O.U.R. .  Its message is powerful, and  I felt I would never be able to rest again until I did something to help this cause.

I’m sharing this with you because spreading awareness of this epidemic is one of the best ways we can fight it.  For this reason, we have decided to throw the Rescue Run 5k.  It will be Saturday, May 21st in Lehi, Utah.  100% of the profits are going directly to O.U.R.  Our goals are to help fund a rescue mission, increase awareness of child sex trafficking, and bring the community together as we fight for a shared cause.

The Abolitionist movie will be premiering May 16th in select theaters.  The proceeds will be donated to O.U.R.  The movie was made to be inspiring.  While the subject matter is heavy, the topics are dealt with in a sensitive manner.  I was moved by The Abolitionist.   I encourage you to become educated by viewing this movie. Watch the preview here.