Swimming with the little man and SwimWays 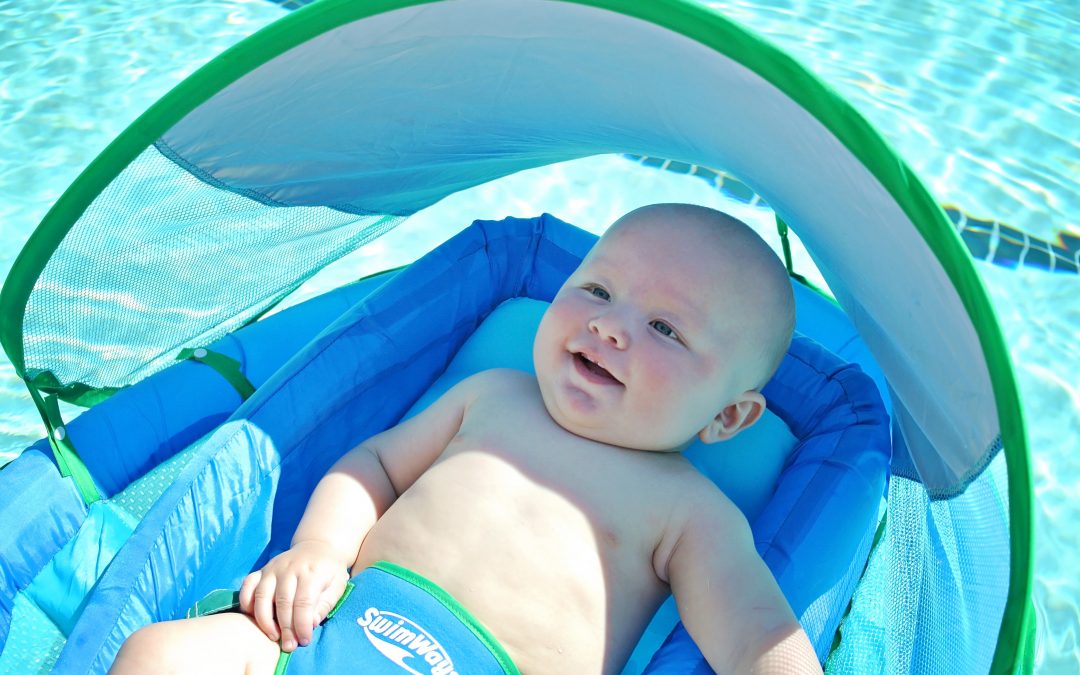 This post was sponsored by SwimWays as part of an Influencer Activation for Influence Central and all opinions expressed in my post are my own. I’ve been sewing tons of swimsuits lately, so I’ve had some fun trying them out*.  But I’ve quickly learned that taking 3 kids swimming is quite the adventure.  The logistics of it becomes a nightmare as I pack sunscreen, and swimsuits, and swim diapers, and towels…and so forth.  That has forced me to be on the lookout for things that make my life easier, like spray on sunscreen and insulated beach bags.  One of the things that has been a game changer for me is the SwimWays Infant Baby Spring Float.  It makes my life so much easier because I can stick Parker in it and let him float alongside me without having to heave his 21 pounds around with me.  It helps that he loves it too.  It’s super comfortable with an inflatable seat that cradles him and a 3-point harness that holds him in, so I don’t have to worry about him falling out. The design aspect is very well thought out with dual inflation chambers and a wide base with an inner spring that creates stability for the float, and an included sun cover that helps to shield his sensitive baby skin.  I simply buckle him in, and tote him around with me using the built-in handles.  My favorite feature is that it easily folds into a small carrying case, making it great to store and transport.  We just brought it with us to Coeur d’Alene and Seattle and it took hardly any space at all. Several years ago, when my oldest was about 18 months, I went on a girls’ trip with some friends and our babies.  We went to a pool together, and while we were there I realized I had left my son’s lifejacket in the car.  I asked my friend if she could watch my son with hers as I ran back to the car.  When I came back from the car, I saw my son quietly underwater next to my friend who was inches from him, but helping her son with something.  I immediately, jumped in and pulled him out of the water, and he was fine, but I learned a HUGE lesson that day.  Drowning is quiet and quick.  My friend felt horrible, but it was a mistake anyone could make.  Unlike what you see in movies, when someone drowns, they don’t scream and yell and splash.  They frantically move underwater, almost completely silently. He had just stepped off the bench in the pool, and gone right under instantly.  I was thankful nothing happened, but now take extra precautions around water.  A great resource for swim safety is the website, Teach Me To Swim, which was created by Swimways.  They have excellent resources on how to teach your child to swim, as well as other helpful information all about water fun and safety. You should definitely take a look if you have small children in your home. *I should note that the swimsuit I’m wearing in these photos was NOT made by me.